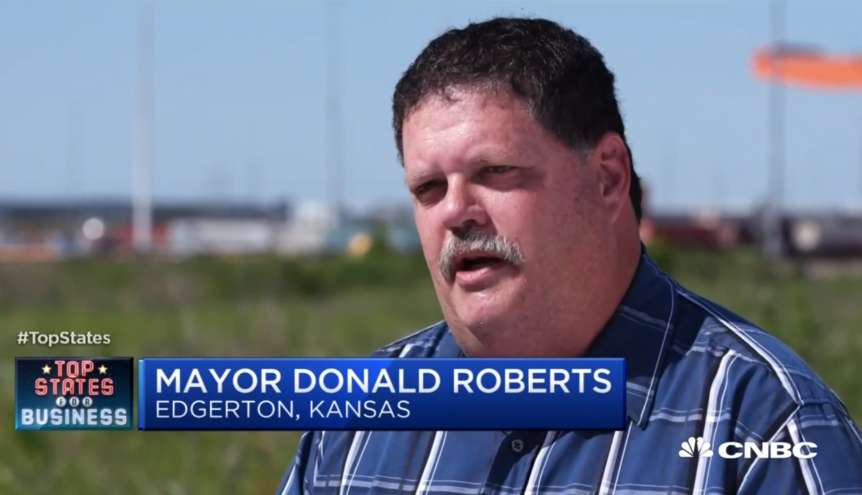 Logistics Park Kansas City was featured on CNBC this week as part of their 2019 Top States for Business special report.

A crew from CNBC filmed at LPKC in June. Kansas Governor Laura Kelly, Kansas Deputy Secretary of Transportation Lindsey Douglas, and Edgerton Mayor Donald Roberts were interviewed as part of the feature story.

“LPKC is a real asset for Edgerton. We’ve worked hard with the developers to make sure this project is successful both for the businesses involved as well as our taxpayers. The tax revenue generated from the park goes to support our roads, parks and other community amenities. We’re thrilled to see our efforts recognized on the national level by CNBC,” says Mayor Donald Roberts.

ElevateEdgerton! President James Oltman says, “We’re capitalizing on how the economy is changing.  Logistics Park Kansas City meets the delivery needs of both businesses and individuals.  The labor basin here makes it possible. Thanks to CNBC for recognizing the growth and the potential of this area.”

The report highlights how BNSF Railroad’s burgeoning inland port supports thousands of jobs in LPKC and how businesses in the logistics park are taking advantage of their proximity to the rail hub.

“Johnson County has a strong record of growth and it’s projects like Logistics Park Kansas City and the intermodal facility that contribute to that success,” says Commissioner Mike Brown.

The rankings are based on a number of factors, including workforce, the cost of doing business and quality of life. CNBC has been ranking state business climates annually since 2007. The full list and expanded coverage will be available at cnbc.com/americas-top-states-for-business.

Top States: Kansas’ inland port on the prairie from CNBC.

Here’s America’s most improved state for business in 2019 from CNBC.